The intersection between fashion and technology was demonstrated for the first time at the Singapore Week of Innovation & TeCHnology (SWITCH) 2018, which was held in September.

Walking down the runway at the festival’s opening show were models decked out in designer garb, which had special visual effects projected onto them using projection mapping technology enabled by Epson’s 3LCD High Brightness Laser projector.

Mira Sianipar, curator and fashion director for the opening show, said the idea of projecting visual effects on garments came about during a brainstorming session when she worked with the National Research Foundation Singapore, which co-organised SWITCH with Enterprise Singapore, to find ways to showcase fashion at a technology and innovation event.

“We wanted to show the latest innovations in textile, fashion and technology, and that’s why we decided to use projectors to project effects on garments,” she said.

“The effects added an unexpected touch in showcasing pieces from textile designers to wearable technologies and sustainability in fashion – everything came together beautifully,” she said, adding that both models and the production team had to be in sync in order for an image to be well projected within a few seconds.

“Everyone assumed projectors, being an older technology, will become redundant when LED panels came out. And for a period of time, everyone was using LEDs, and they were looking at their upsides of being brighter and easier to set up.

“But projection technology has advanced quite a lot in recent years; projector brightness has also increased to match that of LED panels,” Lee said.

Perhaps more crucial was the fact that the projection mapping capability of projectors makes it possible to customise the shapes of images being projected onto objects – even those with multiple oddly-shaped surfaces.

“This gives you a lot of creative flexibility and versatility as opposed to LED panels which are predominately rectangular or modular,” Lee explained.

Lee said LED panels would also be too bright and uncomfortable to look at for visuals displayed on large surfaces like a building façade or a very large backdrop.

“But for projectors, we’re working with reflected light, not direct light – it’s a lot easier on the eyes and more comfortable,” he added. “I think demand for projectors have increased these days, as people realised they have a higher level of versatility compared to LED panels.”

Not all projectors are made the same, however, and it was the reliability, durability and the ability of Epson projectors to run for a long time without overheating and breaking down that sealed Lee’s decision to choose Epson’s 3LCD High Brightness Laser projector over others.

“This is the key quality as for an event company like us,” Lee said, noting that Epson’s 3LCD High Brightness Laser projectors deliver up to 20,000 hours1 of virtually maintenance-free operation.

“We can’t afford to have a projector that overheats or shuts down as it’s required to operate for a very long time – from rehearsals through the night up to the actual event.”

To Sianipar, Epson was at the top of her mind, partly because she had worked with designers who used Epson’s textile printers for fabric printing. “Hence, I decided to approach Epson for this collaboration,” she said.

The collaboration turned out well. “Guests loved the whole show, and the models also found the projection mapping interesting as this was their first time having an image projected on the clothes they were wearing,” Sianipar said.

The organisers of SWITCH 2018 were looking for ways to showcase fashion at an event that brings together partners from around the world in the technology, innovation and enterprise ecosystem.

Epson’s 3LCD High Brightness Laser projector was used to project special visual effects, such as how future fabrics could look like, on today’s garments during the SWITCH 2018 opening show.

¹20,000 hours is the estimated projector life when used in Normal Mode. Actual hours may vary depending on mode and usage environment. 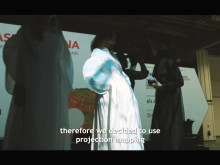 The intersection between fashion and technology was demonstrated at the Singapore Week of Innovation & TeCHnology (SWITCH) 2018, whic...