Since 1994, BW Monastery has been reaching out to people from all walks of life, through its focus on Buddhism studies, cultural education, community care and compassionate service.

As its membership increased over the years, the society – previously known as the Bliss and Wisdom Society – found itself outgrowing its rented premises in Geylang, prompting the society to embark on a mission to build its own building.

In 2014, the society found a plot of land to build a four-storey monastery in Woodlands Drive 16. Besides classrooms, the monastery was designed to contain two halls to host large crowds for events, assemblies, and seminars.

Lim Jue Meng, chief operating officer of BW Monastery, and his colleagues began a search for projectors that would be used in the two halls — the shrine hall on the first level, and multi-purpose hall on the fourth level.

The team already had experience using lamp projectors with up to 5,000 lumens brightness in classrooms at the Geylang premises. The two halls in the up-and-coming building, however, would impose higher technical demands.

For a start, Lim’s team knew that the halls would require projectors of at least 7,000 to 10,000 lumens brightness.

Furthermore, the projectors would have to remain bright and sharp under the halls’ challenging lighting environment – a combination of filtered daylight and artificial lights.

“It was quite clear that Epson’s image quality was better than the rest,” says Lim, who added that the team holistically considered factors including price and after sales support and warranty in awarding the tender.

The EB-L1505U checks the boxes in many ways. Epson’s 3LCD technology ensures equally high white and colour light output, not to mention that colours remain rich and vivid.

With the EB-L1505U’s 4K enhancement technology, images remain sharp even when projected to a total of four 200-inch screens installed in the two halls.

The shrine hall is installed with two screens flanking three brightly-lit sculptures. During prayer events and seminars, slides containing text and graphics are projected on the screens to guide chanting and learning.

The monastery’s audio-visual team, which also consists of volunteers besides staff, can seamlessly switch the EB-L1505Us’ content feeds via a control system.

The content feeds include stationary camera as well as roving camera video streams, such as of close-ups on the lecturing Abbot or first-person iPhone camera viewpoints from crew blending into the congregation.

Even latecomers, who may have stand behind a shoulder-to-shoulder congregation numbering in the hundreds, are able to follow the real-time action easily and remain engaged in the proceedings.

The shrine hall typically fills to capacity during regular weekend sessions, not to mention special religious occasions such as Vesak Day. The fourth level multi-purpose hall is utilised to accommodate overflowing visitorship.

The two 12k lumens projectors are installed in the multi-purpose hall. Here, the throw distance is 25m, doubling that of the shrine hall.

The projectors can stream content feeds from the shrine hall, so crowds in the multi-purpose hall can remain connected to proceedings downstairs.

The multi-purpose hall is also used for events such as concerts, movie-screenings and enrichment camps.

The projection screens in the multi-purpose hall are installed in a vertical configuration. Despite mounting space constraints, the projectors are flexibly positioned in a horizontal configuration, thanks to the EB-L1505U’s new range of motorised lenses. This allows the projectors to be flexibly positioned practically anywhere, without loss of brightness or distortion of image.

The horizontal projector mounting configuration will also ease any maintenance work access, compared to positioning the projectors one atop the other. Maintenance may be the least of worries, as the EB-L1505U’s laser technology can last up to 20,000 hours, without degradation of brightness and sharpness.

The monastery opened in August 2017. The EB-L1505U projectors have been used regularly up to five days weekly. The team has not encountered problems using the projectors so far.

“The EB-L1505U meets the monastery’s needs and requirements,” says Lim. “It has worked well especially with the big crowds we receive, allowing people to learn and participate better in our events.”

The Epson projectors at BW Monastery were installed with the support of Acesian Systems, a Singapore-based info-communications technology and solutions. Acesian was instrumental in integrating all audio and visual systems, from conceptualisation to customisation, to meet the monastery’s requirements.

BW Monastery was looking for large venue projectors that would deliver presentations with sufficient brightness and clarity, even under difficult lighting conditions, to large congregations.

BW Monastery now uses Epson’s EB-L1505U super-bright laser projectors to project images, videos and live streams at its two new large hall venues. Members remain engaged during learning and spiritual practice no matter where they are situated in the halls, even the furthest corners. 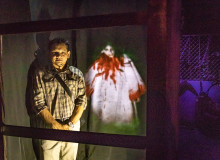