As with most primary schools in Singapore, the weeks leading up to semestral examinations in May and November each year are usually the busiest periods for teachers.

That’s also the time when a school’s printers are worked to the bone, as they are being used by teachers to print heaps of examination papers and results slips.

Take Jing Shan Primary School (JSPS), for instance. Some 80 teachers at the school have been relying on five printers to print thousands of pages of exam papers, student report cards and other documents.

And of all the school’s printers, two monochrome laser printers in the staff room have been its primary workhorses, says Mr Melvin Pao, JSPS’ subject head for Information and Communication Technology.

Both printers churn out a total average of over 15,000 pages a month, which makes cost and print speeds two of school’s most important considerations when choosing a printer.

“We are currently purchasing toners at over $60 each, so we would be more than happy for a cheaper alternative. We also require print speeds of more than 25ppm, as we have about an average of 30 to 35 teachers sharing one printer,” Mr Pao says.

“Duplex printing is highly preferred as the printers are placed at a certain distance from the teacher’s tables. Manual feeding would be tedious,” he adds.

Making matters worse is the fact that its printer in the general office is very old and prone to breakdowns and paper jams. “When it breaks down, the overall productivity of the staff is affected,” Mr Pao says.

To bolster the school’s print productivity and reduce cost – its heads of department also share a colour laser printer, but use it to print mostly black and-white documents – Mr Pao turned to the Epson M100, an ink tank system printer that offers reliable manual duplex printing with unrivalled economy.

With a cost per mono printout of about S$0.003 – that’s 50 per cent cheaper compared with third-party refilled toner cartridges – the M100 can deliver an ultra high yield of 6,000 pages, reducing the constant hassle of replacing cartridges. It also comes with a starter kit of two bottles of inks (140ml and 70ml) for a total yield of up to 8,000 pages.

“Each bottle of ink lasts very long so we don’t have to worry about running out of ink in the middle of the print job. The only regret is that it does not have automatic duplex, so my colleagues will still depend on the laser printer for general printouts,” Mr Pao says.

Mr Pao also appreciates the M100’s print speeds of up to 34ppm, which he says are comparable to what he has experienced with other printers in the school.

“It is a good backup printer since it is fast and cheap, especially when we are generating report cards which do not need colour,” Mr Pao says, noting that the M100 has relieved the school’s other printers for other jobs.

“The printer’s print quality is also comparable to that of other printers I’ve used,” he adds. “It’s especially suitable for printing student report cards because the printouts do not leave imprints in the plastic pockets of the report book folder.”

The ease of maintenance of a printer is critical to many educators who often take on additional duties besides teaching. To Mr Pao, refilling the ink tank was a very easy task, though he says one needs to be careful to avoid spilling the ink during refilling.

However, Mr Pao noted that the printer’s user interface could be enhanced further. A critical component of Epson’s manufacturing process is listening to customers, understanding their requirements, and then creating a product that exceeds their expectations. As such, it will look into Mr Pao’s feedback for future iterations of the M100.

JSPS needed a cost-effective way to print high volumes of exam papers, report cards and documents in black-and-white. An older printer in the general office was also prone to breakdowns and this had affected staff productivity.

With the Epson M100 ink tank system printer, JSPS no longer needs to worry about running out of ink in the middle of a print job. The printer has also relieved the school’s other printers for other jobs. 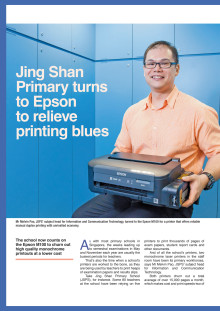