At a time when its rivals are winding up, printing company Poster Connection is blazing ahead with the Epson SureColor™ SC-B7070, the world’s first original ink tank large format signage printer

In a highly-competitive poster printing market, Singapore-based printing company Poster Connection has been relying on cheaper ink made by third-party manufacturers in China to reduce business costs.

But that also means the company, which prints window displays, large-format posters and standees used in exhibitions and events, has to tweak the colour profiles for two ageing printers to match the third-party ink.

“We can spend a lot of time tweaking and calibrating our colour profiles, more so when we work with different grades of paper and printing materials,” says Mr Jacky Loke, founder of Poster Connection, which started off in 1998 as a training centre for design students to pick up image editing skills.

Further, the company’s printers have been prone to breakdowns. It has had to change its printers’ print heads once every few months, and print belts twice a year, as a result of wear and tear. These maintenance issues had taken a toll on the company’s productivity, with its workers often clocking extra hours to complete their jobs and make up for the downtime.

All of that changed recently, when Mr Loke chanced upon the Epson SureColor™ SC-B7070 ink tank large format signage printer while on a business trip in China. He saw how the printer could improve his productivity and efficiency, and reduce the frequency of ink refills while at the same time enabling fast, high-volume printing.

The SureColor™ SC-B7070 is the first in its class to integrate large, 1.5-litre capacity ink tanks, eliminating the need for frequent ink cartridge replacements. The ink tank system is fully integrated into the printer design and is easy to refill.

As a printer designed to address the pain points of commercial large-format printing, which places great demands on speed and turnaround time, the SureColor™ SC-B7070 is capable of production print speeds of up to 13.9 m2 /H. It also supports a high-quality print speed (with about seven to eight passes) of 7 m2 /H.

Impressed with the capabilities of the SureColor™ SC-B7070, Mr Loke snagged two units earlier this year. Both printers are currently being used to generate large-format printouts at the company’s retail shop at Bencoolen Street.

“We’ve been happy with the printers so far, but more importantly my customers are satisfied with the print quality,” Mr Loke says. “While the ink is more expensive than the third-party variety we’ve been using, we no longer need to spend time on colour profiling and calibration. The improvement in productivity far outweighs the cost.”

The standard one-year warranty that comes with the printer also gives Mr Loke peace of mind. “The warranty includes parts and print heads, as well as professional Epson servicing to ensure our printers are operating at their peak,” he says.

Moreover, the print heads are able to achieve extreme precision in ink droplet placement while increasing the nozzle count from 360 to 720 per colour. A single print head utilises eight nozzle lines, delivering 720 dpi resolution in a single pass, unlike conventional models that can only manage 360 dpi, allowing fast printing speeds even at the highest quality setting of 1,440 x 1,440 dpi resolution.

Loading media is also easy, says Mr Loke, as media tensioning can be controlled easily from front or back of the printer for speedier set-up to maximise productivity. However, he found that the pressure exerted by the printer’s rollers was too high for thinner media of about three meters long. “There was some warping in the middle of the roll, but the problem was fixed after Epson helped us to adjust the roller pressure,” he says.

Apart from that isolated incident, Mr Loke has not faced any major issues or downtime with the SureColor™ SCB7070, which is a boon to his worker’s productivity – and bottomline. “With this printer, we’ve been able to speed up our turnaround time for customer print jobs by 20 per cent,” he says.

“This has helped us to maintain our sales and competitive advantage despite the tough printing market, where some of my competitors have either closed down or scaled down their operations”.

Poster Connection’s two ageing printers were prone to breakdowns, which affected its productivity. It also had to replace its print heads once every few months and printer belts twice a year, plus perform colour profiling to match its third-party ink. The downtime and maintenance work was taking a toll on its productivity and turnaround time.

With the reliability and efficiency of the Epson SureColor™SC-B7070 and the use of Epson’s original ink, the company no longer needs to spend time on maintenance tasks or colour profiling and calibration. 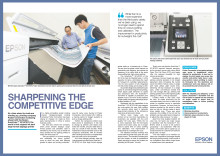